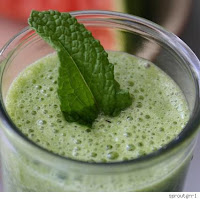 Some people have buffet style religious beliefs I have buffet style detox beliefs! Or so it seems to be the case this summer. I started with an herbal colon and liver cleanse without altering diet; the herbs didn’t agree with my colon though it still was detoxifying (see post from June). Since I knew that 3 weeks wasn’t enough to cleanse as deeply as I needed, I met with Gina Laverde. Gina is raw 99% vegan, body ecology proponent, reiki master, consultant, mom/wife/greenie and so much more. She offered guidance and suggestions for cleansing the gut. Fermented foods. Yeah, that’s the stuff! We aren’t talking good ol’ german sauerkraut and pickles; we’re talking make-it-yourself kefir.

Gina offers a six week rejuvenation program during which she emailed daily mantras, encouragement, tips and recipes on weekdays. My first 10 days was ordering all the necessary items, getting a colonic, slowly incorporating detox spa treatments, and concocting vegetable smoothies. She continued to check in and ask where I was in the process and what I experienced. She is definitely a partner in your rejuvenation. She offers her program ongoing, so you can also try what I am experiencing.

I haven’t been a smoothie person. I like them when they are in front of me; I just think making them takes extra effort and cleaning. As I add chopped veggies and fruit to a bowl to blend I think, “why don’t I just eat these as a salad?” But I make the smoothies as directed. I assume blending them makes the nutrients more bioavailable on a cellular level as well as conserving digestive energy by breaking it down for the stomach. After a couple weeks, I begin adding veggies to the blender I generally have no interest in eating so I know my body is asking for what it needs – celery, red pepper, or carrots. Every once in a while for a little variety I add in some guanabana or tamarind pulp (no sugar slightly sour fruits).

Also in those initial ten day, I buy a loofah for dry skin exfoliation – stimulates the lymphatic system and opens up the skin to eliminate toxins. I buy more castor oil since I will be applying castor oil packs (also in a previous post) a few days weekly, not monthly as usual. I admit I had difficulty fitting this in to my day and sometimes I would just massage castor oil onto my abdomen. The heated castor oil packs will stimulate the Liver and Gallbladder detoxification. I buy some green clay which will absorb toxins as they move down and out through the intestines. These are considered spa treatments if you didn’t catch that.

I visited Wendy Beyer in Lincoln Park for my first colonic. Our phone exchange was calming, we connected about biking. I was a little nervous because my previous at-home DIY experience elicited vomiting so I wasn’t sure what would happen in a professional setting. All went well. She took extra time and slowly began the process as well as challenged and guided me. If you are in Chicago, I highly recommend scheduling colon hydrotherapy with Wendy. The little neighborhood she works in is home to at least 2 other hydrotherapists and each practice has its own style, so if you are looking for just the colon cleanse without all the hulabaloo about nutrition, supplements, raw food, or disease, Wendy could be for you.

My kefir starter arrived from Body Ecology within a couple weeks of meeting with Gina. The Coco-biotic was on backorder. Coco-biotic is a naturally effervescent fermented coconut water drink. I purchased chlorella from Mercola. I chose chlorella over other algae because it nourishes the yin and I definitely needed that. My lungs were dry from biking and in general, my yin is a little depleted. Gina offers great resources for algae and probiotic brands she has seen success with in her own healing process.

I biked over to a Thai grocer and picked up a case of young coconuts. The young ones are the white cone top shaped ones. Now I know. I am making coconut kefir which consists of the kefir starter and t

he water/juice from 9 coconuts! The kefir contains significant number of strains of good bacteria. The fermented drink is cleansing and aids in digestion. I sterilized my mason jars, cracked open a few coconuts, and made kefir. It’s a good five day process for the entire case. And the mason jars multiply. Unfortunately my first attempt did not create good kefir and I was off to the grocer for another case! When it works, your fridge is full of fermented goodness (unless you live with someone who raises their eyebrows, then it is just crazy stuff). At first I had three large containers of kefir just sitting out fermenting and still fermenting when it dawned on me this kefir was going to be too powerful and I ran out to get another case of coconuts to keep making more. I had to get used to the ongoing process of buying a case of coconuts, whacking them open and making more kefir. It is a new thing to add to my life. I also scraped the meat out of half the coconuts and added some of the liquid kefir and made a tasty treat. I guess you could add more liquid to the fat rich coconut meat and make a thick kefir similar to a dairy version! You can add probiotic capsules to the coconut meat and have raw coconut yogurt, too.

Sometimes due to time constraints but wanting to stay true to the tenet of fermenting, I experimented with my own version of Gina’s recipes. I couldn’t recall the ingredients of her fermented beets so I just winged it. Not what she probably had in mind, but they were slightly fermented with coconut kefir! I was supposed to make a massive batch and use a dry package of kefir starter, not the liquid coconut kefir. O well they still ended up fermented. Fermenting helps with the digestive and the cleansing process. Raw cruciferous veggies and sweet root veggies take much energy to breakdown, fermenting those and also fermenting oils helps your body absorb the nutrients. I can ferment anything my body deems difficult to digest and it will no longer be difficult to digest after fermentation.

I realized the ordering snafus and kefir making mistakes and some really complicated weekly schedules here and there I experienced meant that this detox would fill my entire summer and that some of these changes would be integrated as a lifestyle change.

I continue with my supplements.

Maca, Peruvian gingeng, a tonic for the endocrine system. Taking one supplement for the whole shebang is a lot less stressful than taking a tonic for each endocrine organ!

And I play with the detox herbal formula from my previous colon and liver cleanses. It has good stuff in it; I just can’t handle the heat from the habanero.

Add in the chlorella and seaweeds

I drink shots of Coco-biotic at work; I keep eating green smoothies; I slowly eliminate most, not all, carbs and

sugar in the form of bakery cookies, breads, and sweet treats. I didn’t have cravings but I would allow myself the best of the best occasionally, not just any sweet wheat treat. I eliminated all fat in the second month…I had no sugar, coffee or wine cravings so I hoped the once monthly craving for cheese pizza would disappear. Early on had weeks of nineteen hour days and was unable to make meals at home other than a morning smoothie. I love breakfast food – oatmeal, granola, fruit, and nuts – and I did occasionally have oatmeal or nuts and raisins for breakfast and take the smoothie for lunch. On the busy days I would grab a salad; and in the first few weeks, I indulged in a burger and a beer; a hot dog and nachos; and a pizza! Most evenings I was so happy to chop up some veggies, lemon and garlic, cook or sprout quinoa or boil up some bean thread, mix it with a little miso paste and sit down to dinner. Surprisingly despite my normally high intake of vegetable eating prior to the smoothies, those pureed veggies in the smoothies were more filling and got the detox started. In the first few weeks, I’d get logey within a couple hours after a huge (32 oz) smoothie. Not hungry, not thirsty, just loopy and tired. Sure signs of detoxing.

I had a clear plan of my six week window of rejuvenating. The universe had other ideas and luckily I went with the flow. The nearly 2 weeks it took to receive the ordered supplies prepped me physically and mentally for the weeks to come. A month into the process, my liver kicked in. I was so aggravated and annoyed that the process wasn’t going “as planned” and complained I wanted warm, heated up food and then I had some PMS symptoms. Lisa’s got Liver qi! I laughed. Yes, the Liver is a little unruly and asserting itself, but knowing it is shedding toxins and the raw and fermented foods are also building the energy was enough for me to keep steady on the cleanse. So I would be cleansing til the end of Chicago summer. That’s ok. I’ve got a lifetime there’s no rush nothing I have to do instead.